Violin Parts: anatomy of the violin inside out

Learn all the parts of your violin, so you can maintain your instrument, know how the violin works and can create a beautiful sound:

Understanding the different parts of the violin and their purposes is important for violinists of every level to understand in order to protect and maintain their instrument, and to learn how to work with the instrument to produce the best sound. In this article, you will find a detailed description of each part of the violin and bow.

How many parts does a violin have?

Depending what you count (tailpiece as one or each fine tuner separately) a violin has about 90 separate parts. Wow!

Overview of the violin parts 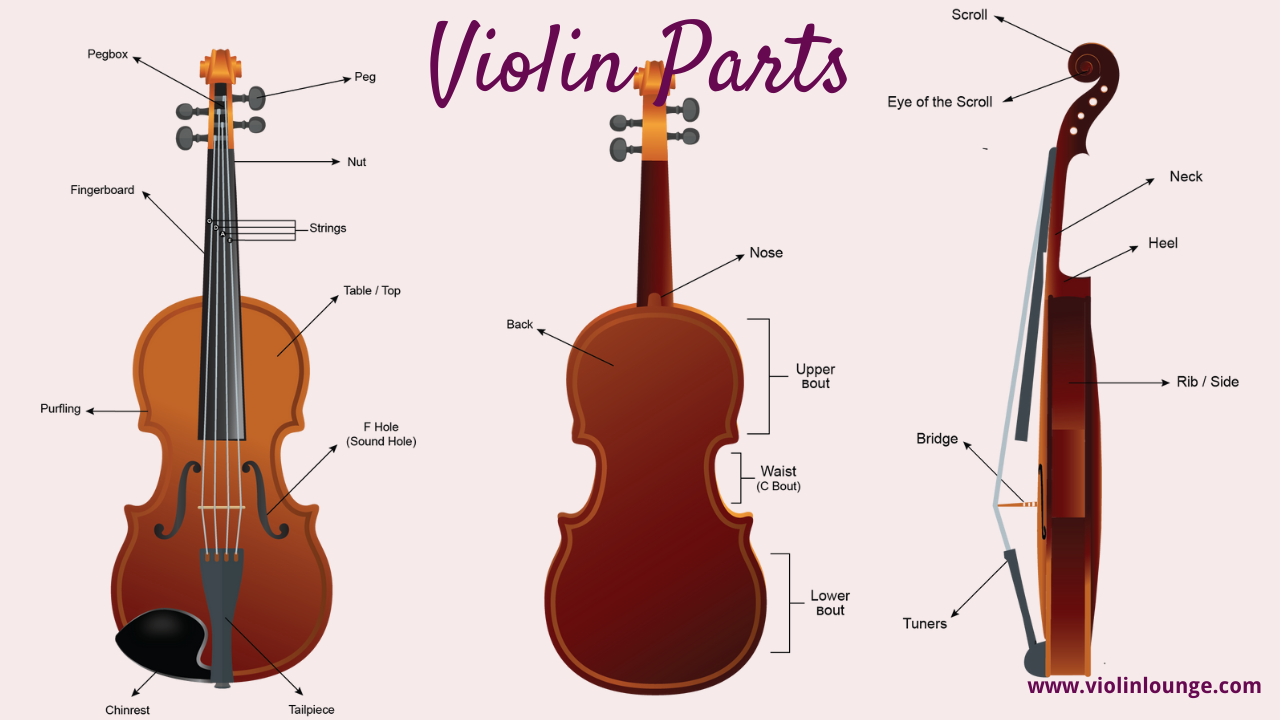 Violin parts and their function

The scroll is the decorative carving at the end of the neck of the instrument. The curved nature of the scroll is an ancient symbol used in art from around the world, and the violin scroll actually mimics the shape of a written scroll. Don’t believe me? Take a piece of paper and roll it up and see for yourself! Most often, scrolls are carved in this curved shape, but sometimes they are carved into animal heads, people’s heads, or other decorative designs. The eye of the scroll is the section of the scroll that is facing the player while in playing position.

The curves of the scroll directly flow into the pegbox, which is where the violin pegs are housed. The top of the pegbox is open, and there are four holes on each side where the pegs are placed. There are two pegs on each side; the pegs for the A and E strings are on the right and the pegs for the D and G strings are on the left. The pegs are round, wooden devices that have a small hole in them where the strings are attached. The pegs are used to adjust the pitch of the strings. Tightening a peg (turning it away from you or backward) raises the pitch, and loosening a peg (turning it towards you or forward) lowers the pitch.

The nut, which is a small strip of wood, lies directly under the pegbox. There are four grooves in the nut for each of the four violin strings to sit on to help them remain evenly spaced. The nut also supports the strings so that they are at a good height from the fingerboard.

The violin has four strings tuned in intervals of fifths. From lowest to highest (left to right), the strings are G, D, A, and E. The strings can be made from a variety of materials, but are most often made of either steel (most common) or gut (less common but used frequently in Baroque performance practice). The strings vary in thickness and tension, and this creates variations in pitch. The lower strings (like G and D) are thicker and are under less tension, while the higher strings (like A and E) are thinner and under more tension.

The F-holes (or sound holes) are two holes in the middle of the violin surrounding the bridge. They are called F-holes because they look like the cursive letter F. After the string vibrates the body of the violin, the sound waves are directed out of the body through the F-holes, thus, altering either the length or width of the F-holes has a direct impact on the sound.

The bridge supports the strings on the lower end of the violin. The bridge is held in place by the tension of the strings, which put about 90 pounds of pressure onto it! When the strings vibrate, the bridge also vibrates, thus, the placement of the bridge directly affects the sound of the instrument. Violin bridges also come in varying degrees of curvature. A more curved bridge makes it slightly easier to play on one string at a time but may make double stops (playing two strings at once) slightly more difficult. A less curved bridge does the opposite: playing on one string at a time may be more challenging, but double stops may be easier.

The tailpiece is an almost triangular piece of wood that holds both the ends of the strings and the fine tuners.

The fine tuners are little metal screws that are either built into the tailpiece or attached with an extra device. The purpose of the fine tuners is to help the player tune the strings in small increments, much smaller than the pegs (which is very helpful for beginning players).

The tailpiece connects to the endpin via the tail loop, which holds the tailpiece up slightly and allows for free vibrations of the body of the instrument. The endpin is the button at the bottom of the violin.

The chinrest is attached to the end of the violin, near the tailpiece. This is where the player rests his chin (or jaw) and what allows him to support the weight of the violin with his head, thus freeing up his left hand. The chin rest also helps to preserve the varnish of the violin by preventing exposure to the acidity of sweat.

The varnish is a liquid comprised of sun-thickened oils, oxidized resins, and color. The varnish gives each violin its beautiful coloring and protects its wood from environmental damage (heat, humidity, etc.).

Additionally, the chinrest is attached to the saddle, a block on the inside of the violin that helps support the tension of the strings.

What’s inside your violin?

Here’s an overview of a violin opened up, so you can take a peek at it’s anatomy and construction: 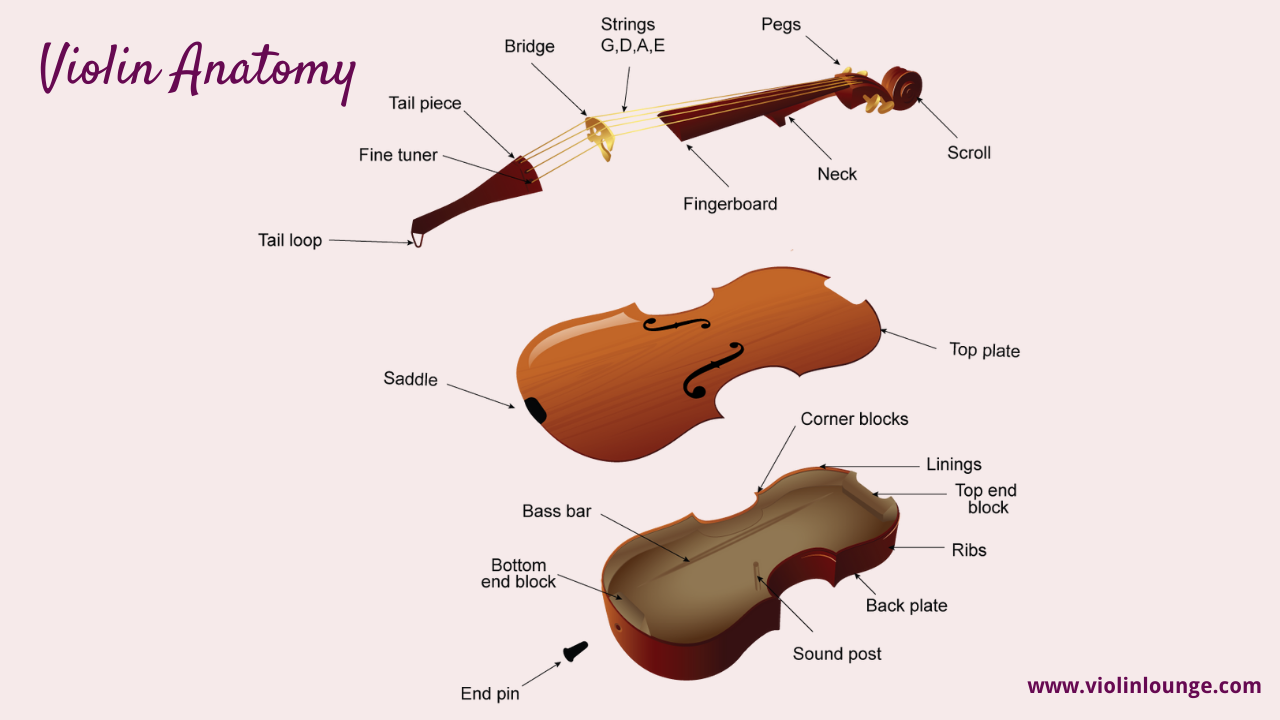 The soundpost is a small wooden post located on the inside of the violin on the right side of the bridge. The soundpost plays an important role in transferring the vibrations of the strings into the body of the instrument, and therefore its placement can greatly affect the sound quality and volume.

The ribs of the violin make up the sides of the instrument. They are pieces of wood that stand vertically and connect the table (or top) and back of the violin.

Violin linings are little boards used to increase the surface area for gluing sections of the body to the ribs and thus increase stability.

Violins have top-end blocks, corner blocks, and bottom-end blocks which are additional pieces of wood that increase stability.

The contact points on the violin is the point where the bow hair touches the string while bowing. In general we distinguish five points of contact and they all make a different sound. Click here to learn more.

I didn’t even include the parts of the violin like the screw, frog, stick, hair and tip. Also you might have heard your teacher say you should play in the ‘upper half’, with ‘whole bow’ or ‘at the tip’. Or practice bowing at the balance point or the spiccato spot. Where to perform all those different bowing techniques? Read all about violin bow parts, bow division and bow strokes right here.

Share it in the comments below. I’d love to read it.

← How long does it take to learn the violin? Violin Size Chart: choose the right size violin →